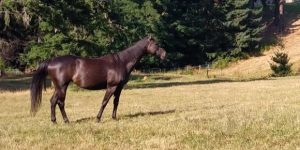 I’ve been playing with some liberty leading with Luna recently, working off of some techniques I learned from my friend Jaya Erkkila. Jaya talks about her method as one of “playing” with the horse, and indeed it is all about having a willing dance between horse and human, no hardware or tack involved.

From a scientific perspective, I would call what Jaya does “negative reinforcement”–in which she adds and maintains some energy to a situation (shaking a noisemaker, or a stick or a flag) and releasing all energy when the horse asks to check in with the person. In other words, you add energy–the horse moves off and maintains some amount of radius from the person; when the horse offers to come in, you release pressure. Ultimately, you can pro-actively ask the horse to come in by offering a release of pressure.

Jaya is very good at this technique–she has an excellent ability to finely modulate her energy so that it’s never overwhelming to the horse, while also always being respected. After watching Jaya play with Luna, I gave it a try–and I noticed right off the bat how meek and unsure I was about whether Luna would follow me, and how to get her to in the first place.

I can sense that I shift from extremes–on the one hand I do not ask quite enough, and so I get a muffled response from the horse. Seeing that this isn’t enough, I then ask too much, and the horse takes off. Learning how to fine-tune the “volume” of my energy is challenging and enlightening.

So anyway, I’ve been playing with these concepts with Luna at liberty in her field, a huge field where she lives with Jake the Belgian. My situation is already challenging with plenty of distractions, including another horse. But Luna and I have done well and she will eventually follow me, although I do not yet have her following me with conviction. It’s a bit more of a “start/stop” situation; she’ll walk a stride or two with me, then veer away and I have to increase the energy to draw her back.

Then yesterday I decided that since my trailer was hitched up anyway (for other reasons) it was a convenient time to bring the trailer to Luna and practice some loading; practice having the trailer on the property and having Luna stay calm about it. I walked down the field to Luna, and she came to me for a few pats. Since my goal that day was about the trailer, I decided to skip liberty play and put on her halter and rope directly. In this case, the “rope” was my 20′ lunge line. But I consciously decided that while the halter and rope would be on her, and in hand, I would still direct her with energy instead of with the gear.

What happened next was remarkable.

No sooner was the halter on and lunge line attached, and I stepped away, than Luna struck out her LF into the lunge line and proceeded to do maybe 30 seconds of crow-hops in place. She looked just like a bronc coming out of the chute, back humped and hopping all four hooves off the ground. Then she took off at a gallop. She didn’t pull past the end of the line, but she galloped and galloped for well over 5 minutes. Maybe 10 minutes.

I was fascinated. Any “trainer” watching me would probably have been on me immediately to get after Luna, to stop her fight and flight behavior (because really, she did both–both the striking out and then the running). But what I took from this incident is that somehow just the placing of the tack was enough to push Luna from curious interaction with me into excitement overload. So instead of interrupting, I chose listening. Really, Luna? As soon as there’s a lunge line in hand you feel immense pressure to do something?

And remember, although Luna soon shifted to running, her first response really did not seem to be about anything other than sheer frustration that a whole bunch of pressure was coming her way. I have never seen her offer such a flurry of bottled-up crow-hops–several of them!–before this incident. Yes, she’s sometimes thrown in a hop or two under saddle as we figure out the canter, but this was a switch from calm to extreme agitation when all I’d done was put on the tack.

It’s always a journey with Luna; she teaches me something new every day I spend with her. This season of my time with Luna can be seen as Phase 4 of my training with her–Phase 1 was the initial riding I did for a year at Goose Creek, then Phase 2 was schooling for a year at Forest Reach. Phase 3 was Gabby schooling her for a year, and now here she is back with me for Phase 4, the liberty phase. She’s been mostly tense through the first 3 phases. I’m trying to be better at listening, at having the confidence to set boundaries, but the compassion to listen, not force. I’d like to see the moments without tension happen more and more often. Historically with Luna, relaxation has been much more likely on the trail, than with arena work.

Contact Mertens Mammals Equine Veterinary Medicine to request an appointment or to request additional information about our services. We look forward to hearing from you.